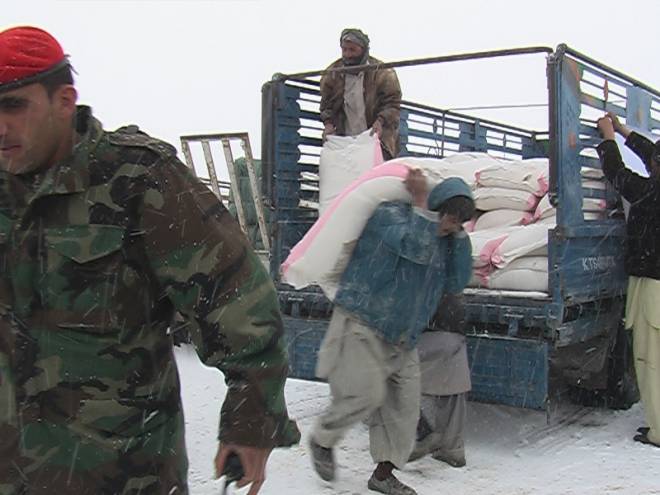 Every year the harsh winter hits Afghanistan and millions who are homeless suffer from lack of warmth, clothing, shelter, and a warm meal. During the past few years, Afghanistan has seen a major increase in the number of people living in devastating conditions due to the return of refugees from neighboring countries. Those returning back to Afghanistan are hit with the harsh reality of not having a decent place to live and many suffer from starvation and the bitter winter cold. With its broadcast around the world, Ariana Television Network and the Bayat Foundation, both organizations owned by Ehsanullah Bayat, teamed up to make a difference. Ariana Television Network, launched in Afghanistan in the summer of 2005 and now broadcasting to Afghan audiences around the world, has been producing documentaries of people and their living conditions in Afghanistan. These programs portray the sufferings of the people in Afghanistan and the need for immediate intervention.

To help those in need in Afghanistan, the Bayat Foundation held a fundraising campaign—”Let’s keep Afghanistan warm for the winter.” Bayat Foundation promised to match every dollar that was raised from the international community for the Afghan people. The matching funds campaign took place between Dec 11 and Dec. 20, 2006. In two weeks time, Bayat Foundation was able to raise $131,000 dollars from Afghans around the world. And with Bayat Foundation’s matching funds, the total amount that was delivered to Afghanistan was more than $262,000. Another $40,000 in out of pocket expenses, for transportation of personnel and delivery of products, was paid for by the foundation. This campaign made a tremendous difference in the lives of many people. The winter aid package that was delivered to 15 provinces around Afghanistan included tents, blankets, flour, oil, coal, winter caps, hooded sweatshirts, and in certain places even medical intervention.

With the rough terrain in Afghanistan, bad road conditions, and the winter weather, delivering the materials to some of these provinces proved to be extremely difficult. For example, it took about 28 days to get the products delivered from Kabul to Daikondi province. According to Ehsanullah Bayat, President of Ariana Television Network and Chairman of the Bayat Foundation,

“These are the times that we need to come together and unite as a nation and help those in need in our country. We thank everyone who participated and helped support our efforts to help Afghanistan. It is Bayat Foundation’s promise that we will be there every step of the way, to give a helping hand to Afghanistan as it continues to rebuild.”

Bayat Foundation is the most active charity organization in Afghanistan. It has taken part in many reconstruction projects including hospitals, schools, clinics, and mosques, among others.