Bayat Foundation Posted in Other Initiatives 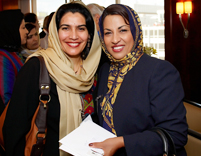 On June 30, 2009, Bayat Foundation Chairman Ehsan Bayat and Executive Director, Fatema Bayat, welcomed 125 leaders including corporate executives, humanitarians and government ofﬁcials from the United States, Canada and Afghanistan for the ﬁrst annual Afghan Symposium for Humanitarian and Leadership Engagement in Washington, DC. The symposium was held in view of the US Capitol building and convened to highlight best practices, engage leaders and foster ways to increase quality of life and opportunities for education and livelihoods in Afghanistan. HE Afghan Ambassador Said T. Jawad served as
Honorary Chairman. Afghan-American Chamber of Commerce Chairman Ajmal Ghani served as Co-Chair and Hon. George Foresman, DHS Under Secretary (2005-2007), moderated.

The symposium also was the springboard for the announcement of the Afghan Trusted Network for the exchange of ideas and information between individuals and organizations to generate meaningful opportunities for Afghans including the youth, Afghanistan’s next generation of leaders. The Afghan Trusted Network, a project of The Bayat Foundation, is permanently Chaired by Ehsan Bayat, and Heidi Kuhn, Roots of Peace Founder/CEO and John Gastright, DynCorp International Government Affairs Vice President will serve as the
Network’s 2009-2010 Co-Chairs.

Ehsan Bayat, who is also Chairman of Ariana Television and Radio Network and the Afghan Wireless Communication Company said, “The youth are the future of Afghanistan, they are eager for education, jobs and training, hence the network’s goal is to collectively do what we can – to engage and realize more training and mentoring opportunities if not eventual jobs for the young men and women.”

H.E. Afghan Ambassador Said T. Jawad underscored the signiﬁcance of this Afghan Symposium to develop the Afghan Trusted Network by stating,”Being in the forefront of philanthropic work in Afghanistan, the Bayat Foundation has helped convene this timely forum of NGOs and the civil society to share our experience and leverage our expertise and networks to enhance efﬁciency and cooperation between the public and private sectors in order to serve the people of Afghanistan, who are hopeful and in need of our support.”

The 2009 Bayat Foundation Awards for Humanitarian and Leadership Engagement were presented at the Close of the symposium to Dr. Peter and ebecca Grossman of the Grossman Burn Foundation (with Charlie Ponticelli accepting on their behalf) and Caroline Firestone of the New Hudson Foundation