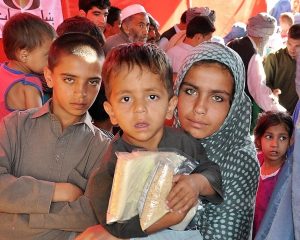 An annual initiative, the Foundation focuses its Winter Aid relief efforts in those regions with large numbers of families needing assistance, who are most affected by Afghanistan’s severe winter weather conditions.

In Kabul’s District Six, the Bayat Foundation distributed 27, 360 prepackaged meals to thousands of residents. In addition to providing many days’ worth of highly nutritious meals, the Foundation also distributed numerous items of winter clothing, including jackets and blankets.

In Samagan Province, the Foundation provided 22,800 meals to local families as well as a large number of displaced persons also living in the region.  The Governor of Samangan Province, together with the families who received assistance praised the Bayat Foundation’s efforts in assisting the people of their region during the cold winter season.

“The food and clothing distributed by the Bayat Foundation to the needy families have solved many problems and helped needy people survive the winter season,” said Akhtar Muhammad Khair Zada, Governor of Samangan.

Winter Aid assistance was also provided to families living in Jalalabad and Paktia Provinces. In Jalalabad, the Foundation distributed 50,160 meals to residents, while in Paktia, 27,360 meals were provided to the Province’s most at-risk families and individuals.

“Afghan winters are typically very cold and harsh, but this year in particular saw severe snow, avalanches, and extreme cold.  The Foundation’s distribution of food and warm winter clothing helps sustain many families through a very difficult time,” said Dr. Ehsanollah Bayat, Co-Chairman of the Bayat Foundation. “We are very proud that our Winter Aid programs have provided food and warm clothing to more than 1,000,000 Afghans over the years, and our Foundation remains committed to continue helping people in need, not only in winter but in every season and in every region of our country.”

About the Bayat Foundation:

Since 2005, the US-based Bayat Foundation, a 501 c (3) charitable organization, has promoted the well-being of the Afghan people. Founded and directed by Ehsanollah Bayat and Fatema Bayat, the Foundation has contributed to more than 300 projects dedicated to improving the quality of life for the youth, women, poor, and elderly of Afghanistan; including construction of 13 maternity hospitals that have now treated over 1,500,000 mothers and babies.

Projects have included the construction of new facilities and sustainable infrastructure in needy regions, and the promotion of health, education, economic, and cultural programs. In addition to his charitable initiatives, Ehsanollah Bayat founded Afghan Wireless (AWCC) in 2002, which was the first GSM wireless and Internet Service Provider in Afghanistan, and later established Ariana Radio and Television Network (ATN), which includes Ariana Radio (FM 93.5). For more information, please email info@bayatfoundation.org.